Ruben’s latest (early 2015) owl tree scene/diorama is nothing short of spectacular.  It brings together all elements of previous iterations of a concept he has been developing over the past 15 years .  And finally, he has added new insights. 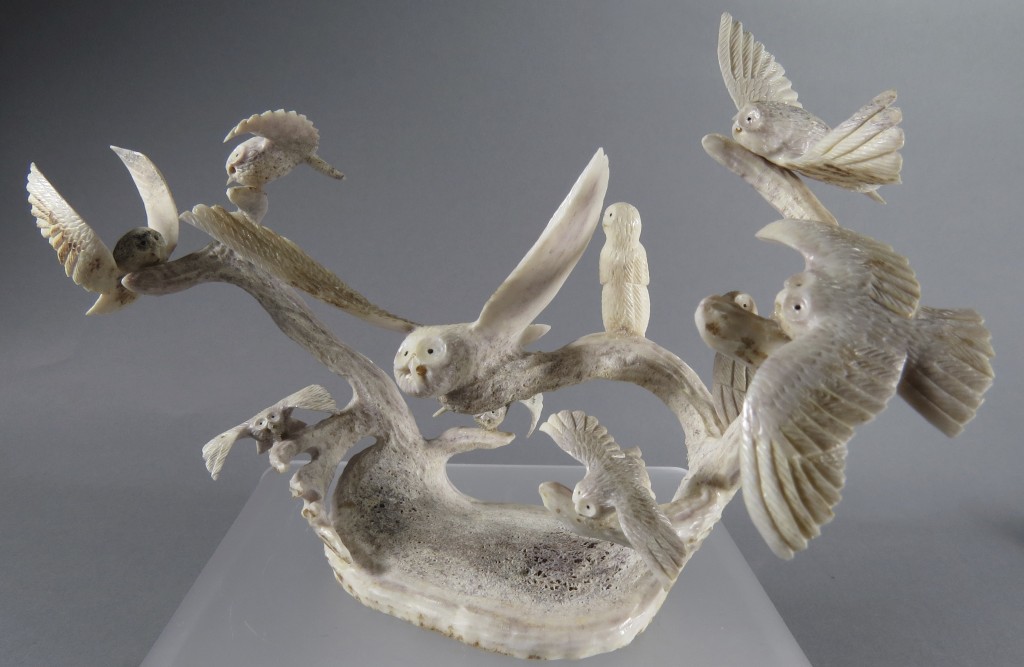 We see a fully three-dimensional scene, interesting from all directions.  Some of the owls are larger than others.  A couple of the spread-wing owls dominate the scene.

In this carving, there is a central focal image – the large 3” wing span owl in the center and also a visual focal point where most of the owls are looking. There is also a feeling of wind blowing through the snag.  In all, there are 12 owls on the snag.  This scene is true artistry – delicate, graceful, fine detail, telling a story.

Note: Most (a few are carved into the original piece of antler) of these owls are carefully ‘pinned’ to the main branch using a small solid metal rod. Then a dab of glue is added to ensure that the owls don’t fly away!

One of the most exciting fetish carvings I had ever seen was an ‘Eagle Tree’ by Estaban Najera, Ruben’s older brother.  That was many years ago.  Estaban had used a branch of coral, maybe 3” in height, attached to a stone base with a number of fossil walrus tusk eagles perched on the branch tips. Stunning. The contrast of the white birds, the red ‘tree’ and the dark base had a strong visual impact.

Estaban made a number of these, each somewhat different. About a year ago, I purchased an even earlier version of this same ’scene’. Made by Pete and Dinah Gasper, it has the same feel, but was quite different. This one has just three turquoise birds on a more stout coral branch and was mounted on a large base of #8 turquoise. 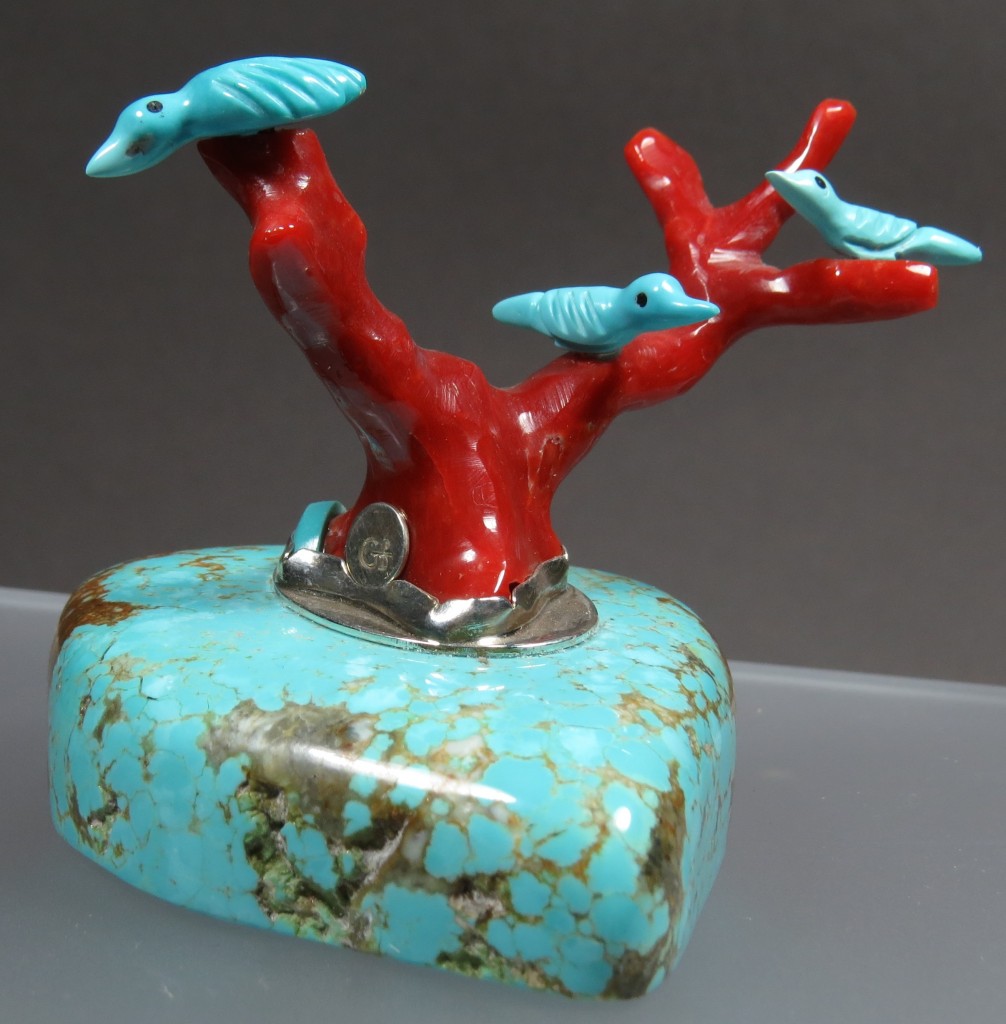 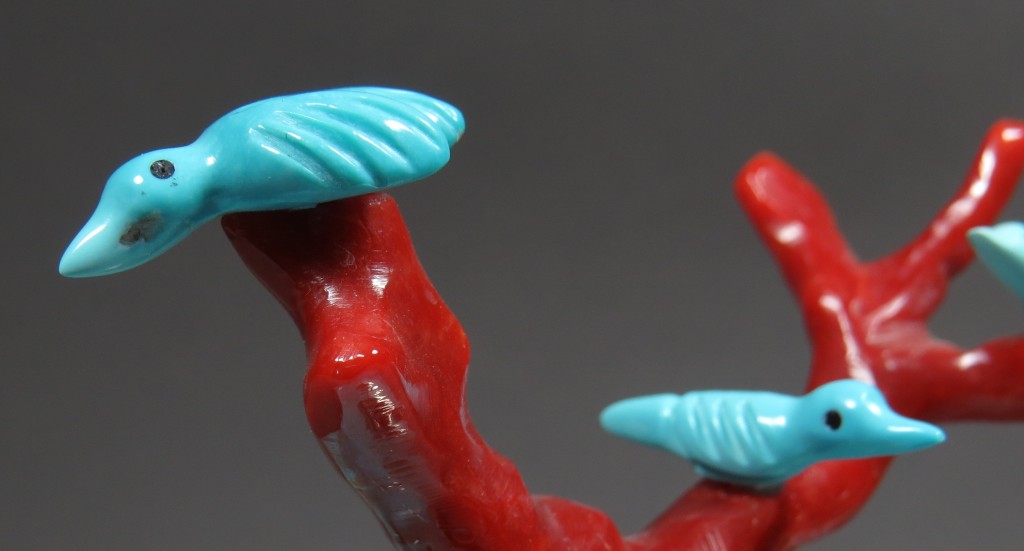 A totally different direction in this ‘tree’ concept was begun by Ruben Najera about 2000.  Ruben’s medium is antler, so all of his ‘scenes’ are of one material.  Originally his ’trees’ were a single thick piece of antler, resembling a tree trunk. Embedded in the trunk were several owl heads, peering out.  Then Ruben would add one or two perching owls to a single branch. 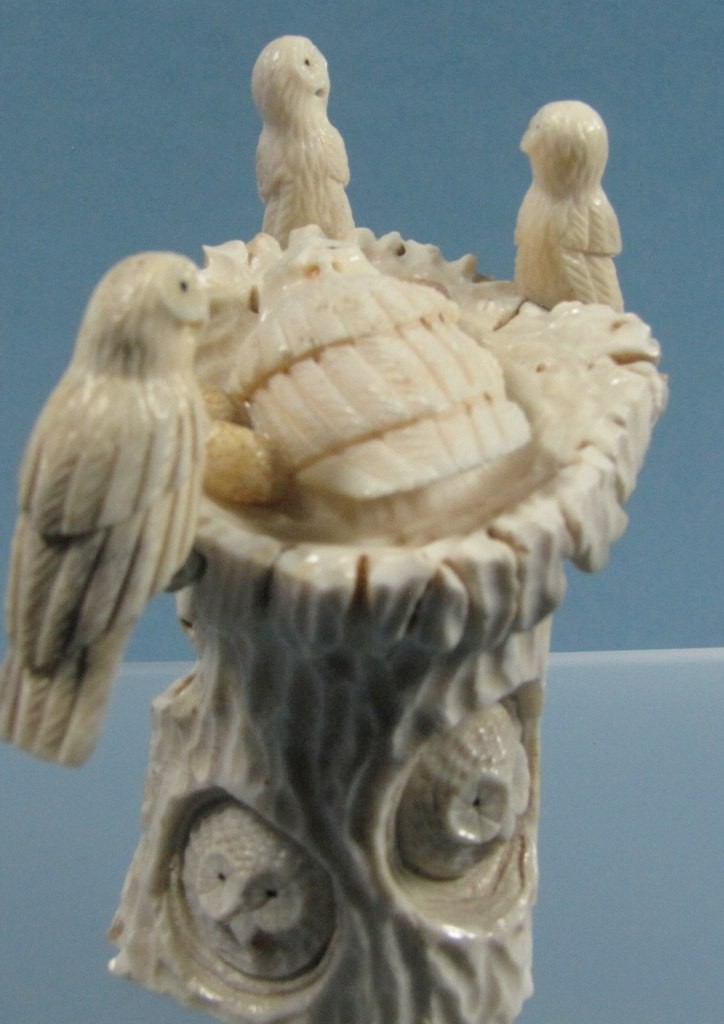 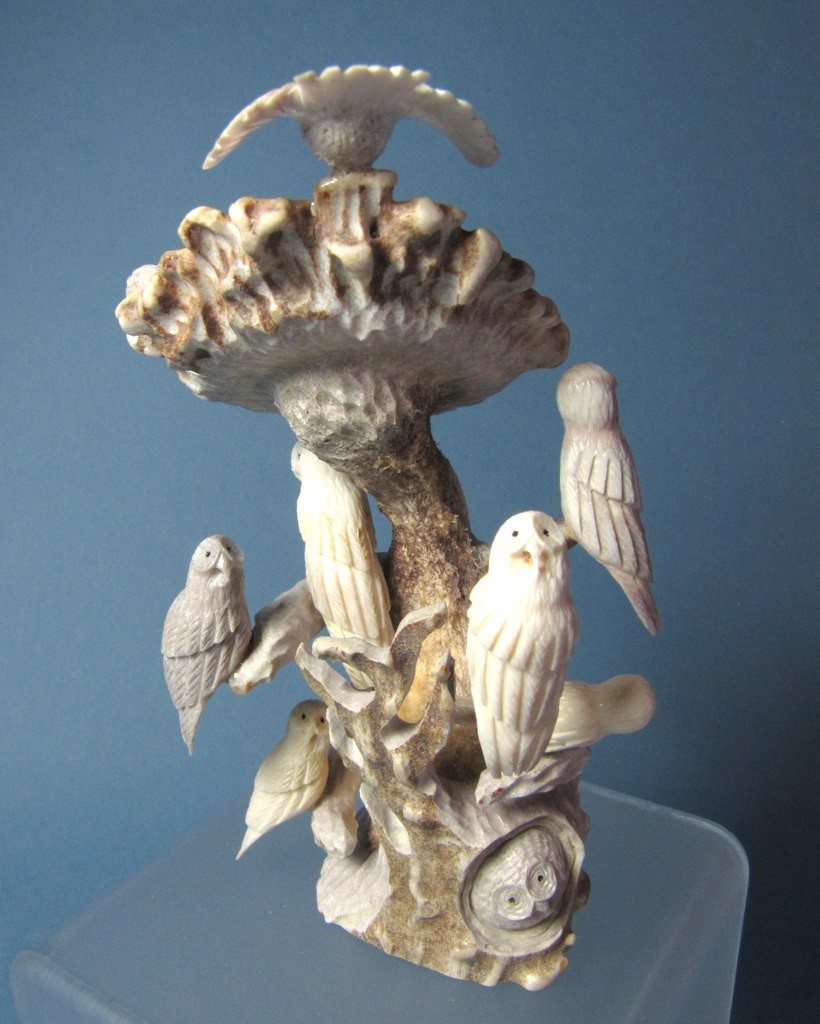 Next came even more complex ‘tree scenes’ – a larger ‘tree snag’ with several branches with additional perching and some ‘in flight’ owls, and, of course, the inquisitive owl heads peering out from burrows in the trunk. Some of these scenes were as large as 10-12 inches. Ruben also makes some smaller tree scenes, even just 2” tall with two or three owls. 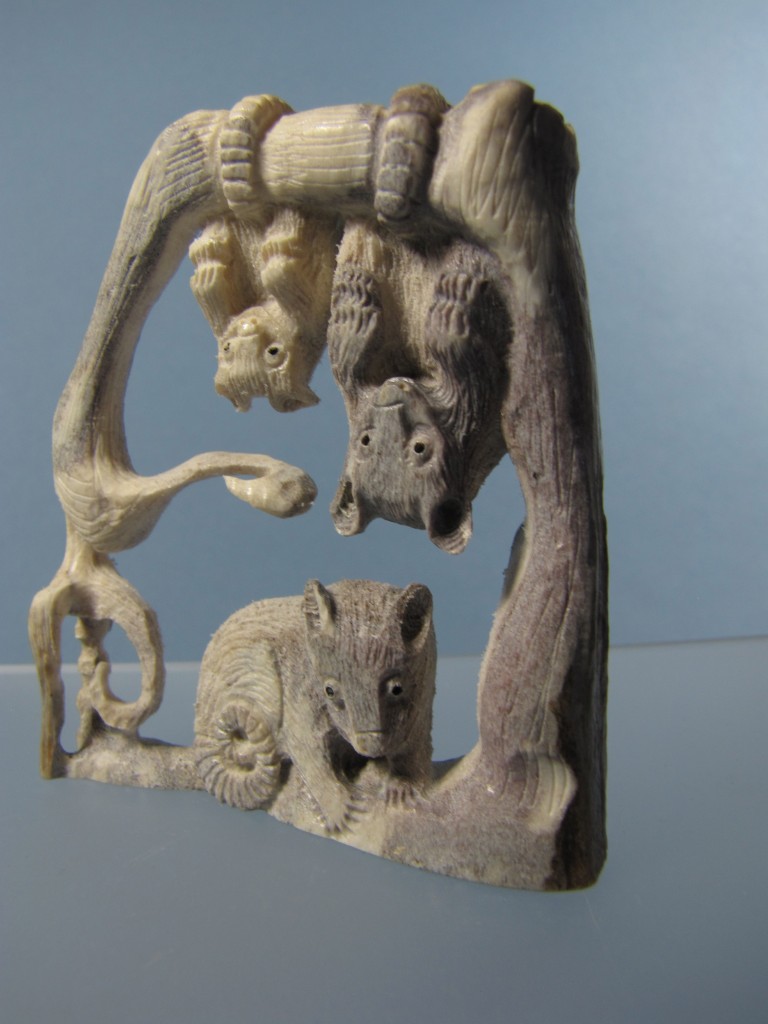 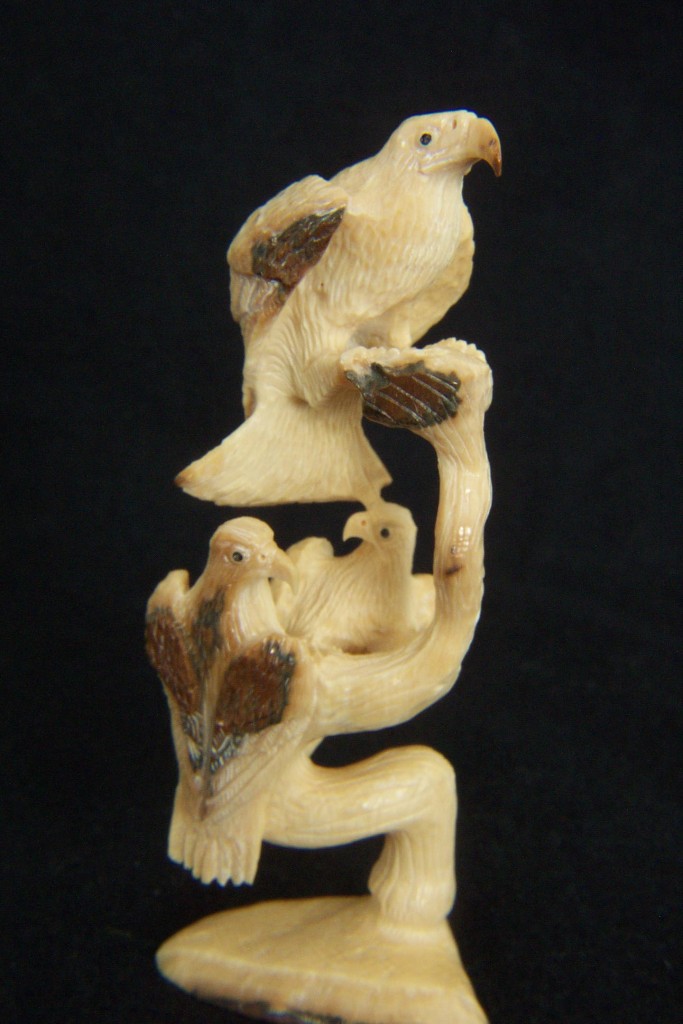 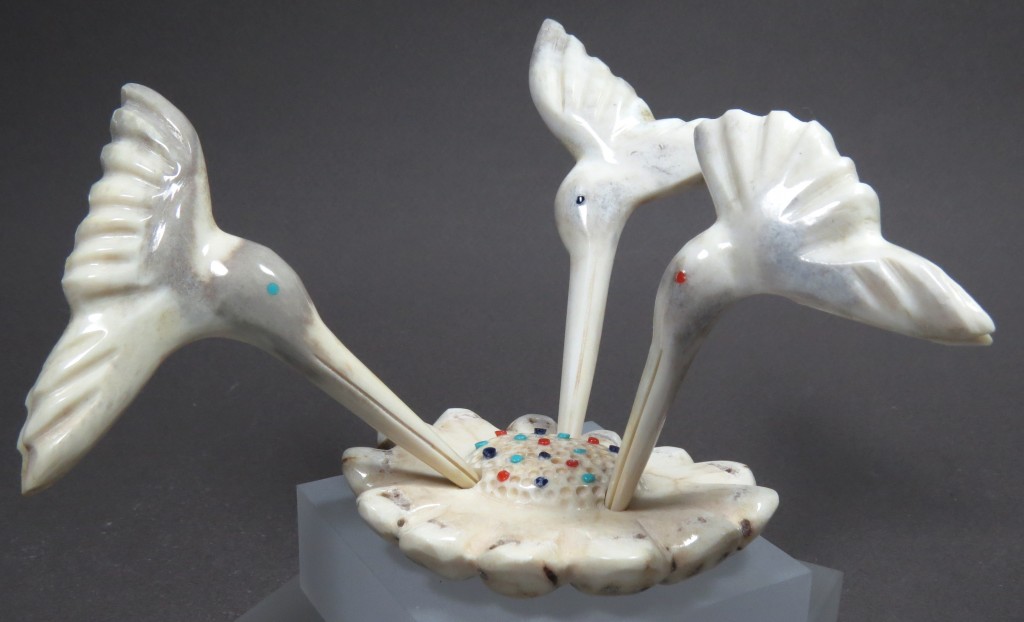 Lest too much credit goes to Ruben, it should be noted that others, mostly in the Laate Clan have also made scenes consisting of more than two images – Louis Malie, Jr, bat trees: Florentino Martinez, ant ‘string’: Maxx Laate, spiders (including his spider rocks), mice, turtles, fish.  Ruben is not committed exclusively to owls.  Some of his ‘tree scenes’ have eagles instead of owls.

I have recently given him a challenge to  create  a ‘bat cave’ (sleeping bats hanging from limbs and maybe a few retuning to the cave). He is intrigued by this concept.  If anyone can conceive and execute this challenge, it will be Ruben Najera.