About Best of Zuni

Home About Best of Zuni

As in all endeavors, there is good, better and best.  So it is within the realm of Native American and Southwest jewelry craftsmanship, including Zuñi fetish carvings, crafts and Zuñi jewelry.  Admirers and collectors are constantly looking for images and designs that captivate their sense of beauty and emotions.

Over the past 35+ years of buying, selling, trading and collecting Native American jewelry, Zuñi fetish carvings and crafts, we have been an active participant in promoting Southwest  jewelry and crafts, and  have expanded to include pieces from Kewa and Navajo artisans.  We have also acquired some older Zuñi fetish carvings and jewelry that are sought by collectors.  Some Indian and Southwest jewelry and crafts have been in our collection for years and only now are being offered for sale on this site.

Sharing a wealth of information, admiration and understanding has been a joy.

Approaching Zuñi for the first time, I was expecting a small village. It was already dark as I approached from the west (just 10 miles from the Arizona border).  As I topped a slight ridge the expanse of lights surprised me. Zuñi was much larger than I had imagined.  It took police to find my contact, a high school teacher living in a ‘teacherage’.  After a night on the floor, I awoke to a new world.

My assignment – to assist teachers and their students with methods and techniques that I had been developing over the past five years in other parts of the country. 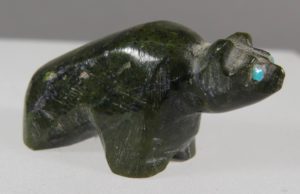 At the end of my first day, a young girl (probably 8 yo) whose class I had worked with, approached me and placed a small piece of rock from her tiny fist over my open palm.  She said ‘I like you’ and quickly retreated. I placed it in my pocket. I didn’t know that it was a ‘fetish’ or even what a fetish was.  Thereafter my eyes and mind began opening. Young Zuñis were knocking on doors at the teacherage offering their carvings.  My hostess and host had recently begun buying (and selling) fetishes and I began that day in 1980 as well.  I still have and cherish that little piece of rock – not much of a carving in terms of detail, but a heartfelt token of gratitude.

A number of teachers in Zuñi began their trading careers during that time period.  I continued to travel throughout the country teaching at schools (in over 20 states) and introducing fetish carvings to stores and small galleries.

My collection of Native American and Southwest jewelry, and sales inventory have grown considerably but that first Zuñi fetish carving has remained at the heart of my feelings about Zuñi and its people – a gesture of thanks, gratitude and originality – a handmade token of appreciation.

Over the years, ‘little bear’ (1¼ x ⅝ x ½) had disappeared from my view and thoughts, been searched for and repeatedly ’refound’.  Yet it has always remained in my memory as the starting point of a long and rewarding career as a fetish trader.

BestofZuni.com is our way of bringing the Best of Zuñi (& More) to the general public.