Among the relatively small number (perhaps no more than two dozen) of Zuni fetish carvers over the past 35 years who might be classified as ‘realists’, one stands out as both mentor (of many) and master (over all) – Dan Quam. Here is a gallery of some of his premier carvings along with some by his siblings and other related carvers

Among the numerous pieces by Dan Quam, this is one of the most dramatic and realistic I have ever seen or owned.

This carving should be more accurately classified as a ‘study’.  Rather than a full-body carving, this large piece of turquoise consists of just two heads – that of a wildcat and an eagle joined at the back of their heads (Siamese twins, so to speak).  The salient features of each are fine detail and some exaggeration (for emphasis). Each ‘end’ depicts different characteristic – the stern, commanding gaze of the eagle with its powerful beak; the wildcat with an almost demon-like stare, snarl and exposed, ominous fangs. 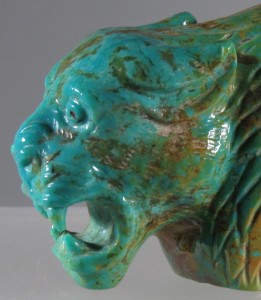 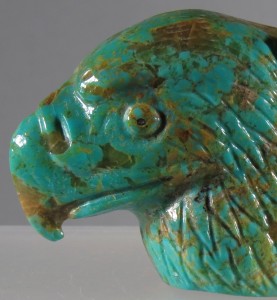 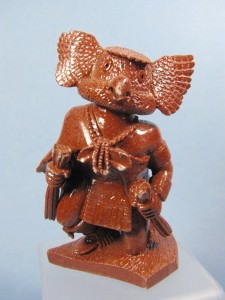 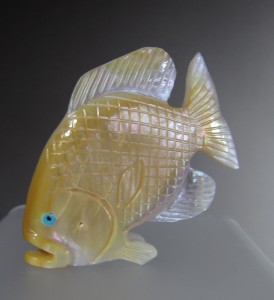 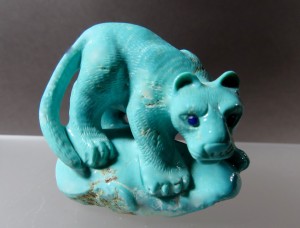 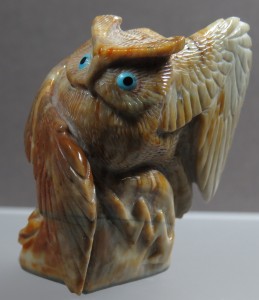 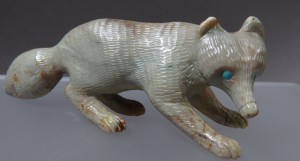 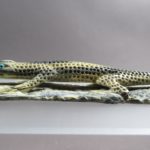 The Cheama clan are best known for bears, mountain lions, eagles, bobcats, wild cats, lizards, Dan Quam, the ‘fount’ of the Cheama clan has been creating powerful pieces for over the past 35 years.  Powerful in the sense of Intensity, strength, elegance or gracefulness (when called for). One of brother Wilfred’s best known carvings is a grouping of heads, all-in-one piece.  He initially made two heads together, then added more until finally a full set of the six directional animals (with the mole on the underside of the rock).  Although associated with Wilfred, Dan conceived of and made the multi-headed fetishes including the 6-directional all-in-one piece carving. Dan spent years observing wildlife, studying poses and postures and, most importantly, projecting himself within their bodies and psyches – be it a cougar on the prowl or a soaring eagle over the cliffs.  He dreams of their power and cunning as hunters. Cheama designs and styling are characterized by the intensity of the eyes and the stance of the image – poised to leap or to move away. Dan’s and Wilfred’s pieces are more an art study – say an eagle head and shoulders and only one outstretched wing or an exaggerated facial features or massive shoulders.  Their wildcats show teeth and fangs and bulging eyes as if on attack, the heads exaggerated in size compared to the rest of the body

The Cheama clan (and a few others) made a giant leap in design in the mid 80s.  They experimented to enable an image to be ‘lifted’ above its base. Prior to that time (early 80s), when a base was used, the legs were attached (with glue and pins) to the base.  This may have been done for stability or contrast. Single-piece carvings on a base first showed ‘no light’. Then these innovators figured out how to show ‘day light’ between the legs.  The animal basically was able to stand up and the base became part of he scene.

As a child Dan enjoyed wood carving – whittling with a pocket knife and honing his dexterity and attention to detail. His grandmother said it all when she told her then teen-aged grandson – “God gave you a gift.  Do something with it” He has. Dan is quiet, reflective, passionate yet strong in both his personal features and his demeanor. As one of the few truly dominant Zuni fetish carvers for the past three decades, Dan Quam (at only 63) has many more productive years of creating truly stark realistic images. His work will continue to be collectible for years to come. Click HERE to reach home page